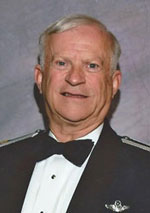 A native of Baton Rouge, LA, he graduated from Baton Rouge High School in 1968. He earned the rank of Eagle Scout. He received a Bachelor of Science degree with a minor in American history from Louisiana State University in 1972. Upon graduation, he was commissioned as a second lieutenant in the United States Air Force through ROTC.

John’s lifelong passion for music was cultivated during his years as a trumpet player and student conductor of the BRHS band, and deepened during four years as a member of the LSU Golden Band from Tigerland. He played trumpet for the Baton Rouge rock band Brass Mammoth and channeled musical influences such as Chicago, Chase, Maynard Ferguson, Stan Kenton, Blood, Sweat & Tears, and his father’s big band, The Buddy Lee Orchestra. Upon relocating to Memphis in 1995, John revived his love for jazz as a trumpet player with the Memphis Knights Big Band, VA Band, and the Memphis Shrine Band, and as the leader of the Memphis Doctors Band. He volunteered his time to play “Taps” for local military funerals in association with Bugles Across America.

John was an aviator in every sense of the word. His passion for military history and love of flying were contagious. He participated in numerous events to promote aviation and preserve aviation history through such groups as the National Aviation Hall of Fame, the National Museum of the United States Air Force, the LSU Alumni Association and the Cadets of the Old War Skule. He piloted his own planes in retirement and was a traveling member of the “Black Ducks” flying club near Milton, FL. He will be deeply missed by his family, friends and all who knew him as an exceptional man, full of life and joy in every moment.

In lieu of flowers, donations may be made to The National Aviation Hall of Fame, P.O. Box 31096, Dayton, Ohio 45437 or the National Museum of the United States Air Force by way of the Air Force Museum Foundation, P.O. Box 1903, Wright Patterson Air Force Base, Ohio 45433.