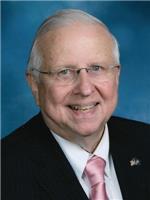 Fred served in the United States Army Reserve and was inducted into the Louisiana State University Military Hall of Honor. He was a lifelong member of First United Methodist Church where he served as Chairman of the Administrative Board and was Lay Leader for The United Methodist Conference. Fred served as the Head Usher at the 11:00 service for many years.