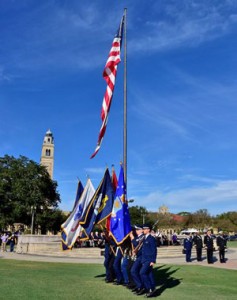 Four LSU graduates will be inducted into the Hall of Honor for LSU Distinguished Military Alumni during LSU Salutes 2018. The event is co-sponsored by the university and Cadets of the Ole War Skule.

The induction ceremony, which will include a military flyover and 21-gun salute, will take place at 9 a.m. on Saturday, Nov. 3, at the LSU War Memorial on the Parade Ground. The event is open to the public.

On Friday, Nov. 2, the inductees will be honored at the Commandant’s Luncheon in the LSU Student Union Ballroom and at the President’s Reception/LSU Salutes Dinner at the LSU Faculty Club. Rear Admiral Craig A. Clapperton, Deputy Director for Future Operations, U.S. Cyber Command, will deliver the keynote address at the Commandant’s Luncheon. Congressman Garret N. Graves will be guest speaker at the dinner Thursday evening.

They also will be recognized during pre-game activities at the LSU vs. Alabama football game at Tiger Stadium, and the Tiger Marching Band will present a “Patriotic Salute” during the half-time show.

Participating in LSU Salutes events will be members of the LSU Corps of Cadets, which includes LSU Army and Air Force ROTC students and Southern University Navy ROTC, which consists of LSU and Southern students.