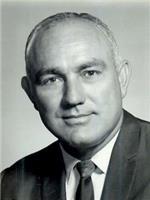 Denver Thomas Loupe (1927-2019). A beloved father and grandfather, he is predeceased by his wife of 68 years, Ferne Kemp Loupe; his parents, Stephney Loupe and Linda Marie Gaudin Loupe; and his siblings Wilman Loupe, Mildred Kimball, Brunhilde “Tatum” Sheets, and Eugene “Yopi” Loupe. He is survived by his children Stephen Loupe and spouse Melody, and Stephenie Loupe Teichman and spouse Dan; grandchildren Marie Teichman, Ross Teichman and Stephen Loupe II, and many nieces and nephews. Denver was a resident of Baton Rouge since 1952, where he was a charter member of St. Aloysius Church and devoted his life’s work to the LSU AgCenter. He was born Feb 4, 1927 on a farm near Burnside in Gonzales, Ascension Parish. He graduated from Gonzales High School in 1944 and attended Northwestern State College in Natchitoches. He served in the U.S. Navy (1944-46), returned to LSU and received his B.S. in Vocational Agriculture in 1949. He began teaching Vo-Ag at Gonzales H.S. and then Dutchtown H.S. He was appointed County Agent in St. James Parish in 1952 and Sugarcane Specialist in 1954. He received a M.S. in Agricultural Extension Education in 1957 and his Ph.D. in Botany and Plant Pathology in 1961. He was appointed Division leader in Plant Science in 1972 and Director in 1978. He retired 30 Jun 1993 after 41 years of service as Vice-Chancellor of the LSU Ag Center and Director of the Cooperative Extension Service. He and Ferne established and endowed the Denver and Ferne Loupe Team Award and the Denver and Ferne Loupe Fellowship (endowed in the LSU Foundation). He was a member of 22 professional organizations; an International authority in Sugarcane and received numerous leadership and outstanding service awards from youth, agriculture, and community organizations. Throughout his career, he worked and supported the 4-H program. He is a former Ascension Parish 4-H club member and served as the first President of the 4-H Parish Executive Committee. He served as a board member of National 4-H Council and Louisiana 4-H Foundation, which was formed while Dr. Loupe was Director. Dr. Loupe received over 30 awards for his service to the people of Louisiana from numerous professional and community organizations. In 1983 he was recognized by National 4-H Council for his outstanding service to the 4-H program. He served as Secretary, Vice-Chairman and Chairman of Southern Region Extension Directors; was a member of the National Extension Committee on Organization and Policy; named Progressive Farmer 1992 Man of the Year; elected General Secretary-Treasurer of the International Society of Sugar Cane Technologists and General-Secretary of the American Society of Sugarcane Technologists. He was an Ex-Officio member of Louisiana 4-H Foundation, on the Board of Directors of National 4-H Center; and Gamma Sigma Delta President and Service Award Recipient. As a WWII veteran, Denver was a 65 year member of LSU’s American Legion Boyd/Ewing Post 58, and an active member of Cadets of the Ole War Skule. He served as Commander of Post 58 in 1968-69, and was awarded LSU’s highest honor when inducted into LSU’s Military Hall of Honor in 2007.