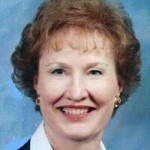 Iris Jean Altrogge Soulé , of O’Fallon, Illinois, passed from this life to the next on May 30, 2020. Iris was born to Emmett Carl and Florence Azile (nee Dean) Altrogge on April 22, 1934 in a farmhouse in Audrain County, Missouri with the assistance of a midwife.

Growing up in Mexico, Missouri, Iris graduated as Salutatorian of the Mexico High School Class of 1952. Following high school, she attended Lindenwood College for Women in St. Charles, Missouri for two years, and graduated from Louisiana State University in Baton Rouge, Louisiana in 1956 with a Bachelor of Science Degree in Music Education. While at LSU, Iris was a member of the national sorority, Phi Mu, and the Wesley Foundation. While teaching music education for two elementary schools in Houston, Texas, she met and married Covert Aiken Soulé, Jr. on April 6, 1957. At the time of their marriage, Covert was a Second Lieutenant in the Air Force stationed at Ellington AFB, Houston, Texas.

Iris and Covert raised three children and enjoyed being stationed in different states across the United States. During their assignments, Iris volunteered for a number of organizations over the years. While in Hawaii, Iris took hula lessons and golf lessons. In Louisiana, she was a den mother for Cub Scouts, and she was the National Advisor to “Angel Flight”, the auxiliary organization of the Air Force ROTC program. Following Covert’s assignment at LSU teaching aerospace studies (AFROTC), Iris single-handedly managed the family while he was flying 209 combat missions in Vietnam for a year. Upon Covert’s return from Vietnam, the family relocated to California for 3 years, where they enjoyed exploring the local area taking day trips and enjoying some night life at Lake Tahoe. During their first tour at Scott AFB, near O’Fallon, Ill., Iris enjoyed singing with the Scott Heather Tones and church choir. While they were stationed in Anchorage, Alaska, Iris worked as a docent, conducting tours in the Native Alaskan museum in Anchorage and volunteering at the Base Thrift Shop. After settling in O’Fallon a second time, Iris obtained a degree in medical records and worked as a tumor registrar at Children’s Hospital, Lutheran Hospital, and St. Anthony’s Hospital. Iris was active in her church, St. Michael’s Episcopal Church of O’Fallon. She also enjoyed being an active member of the Great Scott Investment Club and doing genealogy research.

Interested in joining us and supporting Cadets of the Ole War Skule? Visit the membership page.