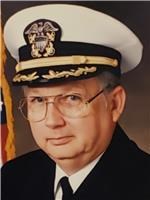 William “Bruce” King, Captain USN (retired), was born on May 27, 1939, near Roxana, AL. He peacefully passed away on Monday, June 8, 2020, at the age of 81. He was a resident of Greenwell Springs, LA. Bruce enlisted in the US Navy and served for 40 years. He obtained the rank of Captain and was considered a ‘mustang’. He received his Chemical Engineering Degree from Auburn University and a Masters Degree from LSU. Locally, Bruce served on the commission to bring the USS Kidd (DD-661) to LA Naval War Memorial. He was a member of Cornerstone Fellowship in Central, LA, an avid gardener and a member of the Gideons International. Bruce is survived by his wife of 62 years, Betty; children, Beth Serpas (Stew), David King (Karen) and Tim King (Natalie); grandchildren, Mitchell Serpas (Chavanne) and Victoria Higbie (Steve); twin great-grandchildren, Benjamin and Willow Serpas; brother, Leon King (Marilyn); and numerous nieces and nephews. Bruce is preceded in death by his parents, Wilmer and Bessie King; and sister, Edna Earl King.